A Decade of Love 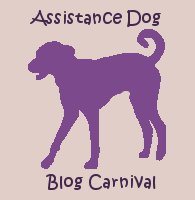 When I heard the topic for this tenth edition of the Assistance Dog Blog Carnival being hosted by Sharon at After Gadget, Perfect Ten (or Perfect or Ten), I tried hard to come up with something fitting to my present partnership with Thane or even one that could address both my wonderful boys, but try as I might, all that entered my mind were topics fitting for my first partnership with Chimette (AKA Met). I figured this time, maybe it was just Met's turn to shine through.

When I adopted Chimette, I had no real expectations of either of us. I had hope, but I also had the echoing words from a service dog program, You can not do this yourself. With the encouragement of a friend, I said goodbye to that program and learned what it meant to be a service dog owner trainer.

Rolling out of the rescue center with my tri-color six month old Border Collie/ GSD pup I had chosen to train as a hearing dog,  I had no idea the role he would play in my life over the next decade as he taught me to love life in spite of the severe progressive nature my disabilities would take on. Most envision service dogs from a limited skill perspective. Either they are hearing dogs or guide dogs or mobility service skilled dogs or psychiatric dogs. I had those same limited views when I adopted Met put into my mind by a program that was incapable of making the dream a reality for most of the multi-disabled. I never in my wildest dreams could have imagined a dog doing as much for me as Met and I learned to do together over our decade long partnership.

Training though was truly fun. With each little step, our bond developed and strengthened, enabling us both to trust in the other. At first trust was difficult for Met as a rescued, most likely abused, vaccinosis pup. I was patient and accepted the reality that he probably would not be fit for more than an in home hearing dog. Though he had already proven himself by eight months of age when he saved my life from a smoking alert system signaler that did not turn off, he had issues with some social skills that needed to be addressed before public access could be considered.

Time had a way of healing wounds (for both of us). Instead of a timid dog partnered with a person who had a negative outlook on life after nearly dying and severe disability set in, this team wound up as a bold guide, hearing, service, medical alert dog who turned me into someone who loved life regardless of the obstacles it presented me with.

The journey wasn't always smooth. Between my progressive disabilities, our health, and my novice level of training and dog handling, if any partnership was destined to fail before it even got out the door, this one was the one.

At times the support was minimal in the service dog community, not to mention the community in which I lived. It was still a time when it was a fairly new concept to train one's own service dog. I often got responses from trainers or individuals pointing me to one program or another where I could obtain a service dog. By that time, responses like that were so laughable. I had my service dog. Why would I want to go to a program that would tell me what I had done was unachievable without them!

The smoke detector blares and Met is at my side in full alert mode. I drop items where I can't reach and he snatches them up before I can finish saying *mommy needs*. I need to do one of the many transfers each day and he lays at my feet preventing them from sliding forward. I need to get across the street or to the store and he is in full guide dog mode. When I developed Multiple Chemical Sensitivities (AKA MCS), he would go into medical alert mode when we got into areas of bad toxicity all as a means to protect me from a life threatening emergency. As each disability compounded, the two of us trained together to develop skills that kept me independent and the two of us safe in the community.

In the last year, there was more medical than good memories (for both of us). That does not change how I think of the decade that he was at my side. When I think of us, I think of the day the picture below was taken; how carefree and happy I felt while learning to trust him. I think of the freedom he provided for me to be myself, independently functioning in the world despite being a deafblind incomplete quad with severe multiple chemical sensitivities. I think of how fortunate I was to have my first partnership be such a successful one. Above all the feelings I have about Met in my life, I think about how fortunate I was to be the one who adopted Met. I was so lucky to have him working at my side for a decade. 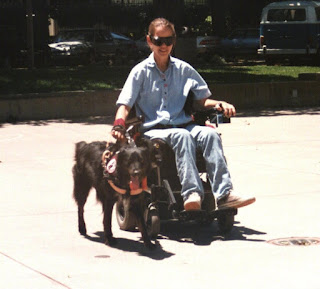